While fishing aboard his 28' Buddy Davis, off Ship Bottom, NJ on 5/31 Captain Frank landed the world record fish using a Temple Fork Road and Cortland line and live bunker as bait. Captain Frank’s 117cm catch was enough to break yet another IGFA record for the Fin Chasers. Capt. Frank was fishing with Greg Myerson when the previous record was broken.

Following up the breakout first season of The Fin Chasers, filming for Season 2 is now underway. Season 1 had over 1 million viewers witness the catches of the Fin Chasers team win tournaments and break numerous IGFA records, including 4 for Wades wife Debbie Boggs! Season 2 will premiere June 26, 2017 on Destination America and the September 25, 2017 on the Pursuit Network. The destinations, records sought, and tournaments entered will put the Fin Chasers up against their biggest challenges to date. Costa Rica, Southern Florida, The Bahamas, and all up and down the American coasts the Fin Chasers will put their skills, gear, and passion to the ultimate tests.

Leading up to the premiere of Season 2, be sure to check out The Fin Chasers site, finchaserstv.com regularly as well as The Fisherman Magazine. We will be featuring weekly videos on both sites covering everything from how to set up a kite rig, to the legend of the Crescitelli Cannolis.

The Fin Chasers are proud to welcome back all of season one’s sponsors that include Raymarine Electronics, D&R Boats, Buddy Davis Boats, Temple Fork Outfitters, and Cortland Line. The crew would also like to extend a warm welcome to some of their new sponsors: Yeti Coolers, Release Boatworks, Maui Jim Sunglasses and Daiwa just to name a few. Stay tuned for swag and giveaways from these great sponsors along with The Fin Chasers!

Check out the link below of the video of this epic catch! 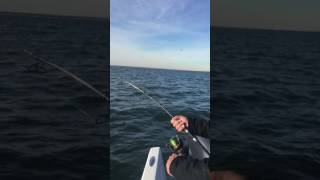 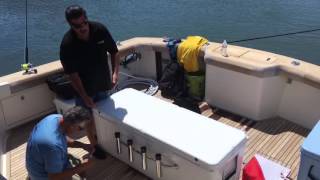